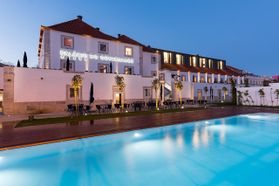 It's not just another hotel in Lisbon. It is the Governor's Palace, with 60 rooms, all different, next to the river, in the heart of the historic centre of Belém, in one of the most beautiful and emblematic areas of the capital.

Built in the former Governor's house at the Tower of Belém, exquisitely restored on Roman remains probably from the 1st to the 5th centuries, the Governor's Palace Hotel is a palatial building, with a Reception that was once a Chapel, a signature Restaurant (Chef Vera Silva), with original vaulted ceilings and a contemporary SPA connected to the ancient thermal traditions of the Mediterranean cultures.

Near the Tagus and next to national historical monuments, the Governor's Palace is the natural choice for those who want to be in Lisbon, close to everything, from culture to leisure and far enough away to feel peaceful.

Amenities subject to availability, confirm with the accommodation